Hartley Beck [thanks to Tom Hartley]

map of local area to Kirkby Stephen and Hartley Village [click to enlarge].

view from Hartley Hills across Kirkby Stephen Ascent is found by passing through the hamlet of Hartley, just behind Kirkby Stephen. Climb steeply beside Hartley Quarry until the road end. From here a boggy bridleway crosses the flank of the fell, to reach the summit of the road pass into Swaledale. 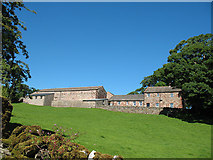 Hartley Fell Cumbria Other feature NY8007 54° 27.7' N 2° 18.0' W ... Nine Standards Rigg is the summit of Hartley Fell, a fell in the Pennine Hills of England. It lies near to the boundary between Cumbria and North Yorkshire, a few miles south-east of the village of Hartley and Kirkby Stephen and approx 700 metres outside the Yorkshire Dales National Park. The name is derived from a group of standing stones or cairns, the Nine Standards, located near the summit. [see also Hartley Birkett]. map

View Larger Map
New Hartley Northumberland Village, NZ3076 55° 4.9' N 1° 31.3' W map NEW HARTLEYas it is now called is a Mining Village that grew up around the HARTLEY Colliery Hester Pit which was opened around 1845, with three main streets Cross Row, Long Row and Double Row, with a Methodist Chapel serving the villagers Spiritual needs, also the church of St. Michael and All Angels New Hartley, erected in 1900 by C W Jackson M.A. Vicar.
The village is historically linked to nearby HARTLEY village, which was originally an Anglo-Saxon settlement. Records show that coal mining began in 1291. A number of pits were created and exhausted at HARTLEY, before a new pit called Hester was sunk at a site in between Seaton Sluice and Seaton Delaval. Soon after, families settled around the new mine, and the village of NEW HARTLEY was created. Houses were built to the North and West of the pit, in a rough L shape, which included a Methodist chapel and an Inn, the "Hartley Hastings Arms" and New Hartley Workmens Club. The New Hartley Pit Disaster occurred in the village in 1862, killing 204 men and boys. This led to a change in the law and a "best practice" of building two shafts to a pit throughout Britain and many countries across the world.

Hartley Northumberland Other feature NZ3375 55° 4.3' N 1° 28.5' W ... is a township and village in Earsdon parish, comprising, along with Seaton Delaval, 4,219 acres. Population in 1801, 1,639; in 1811, 1,872; in 1821, 1,795; in 1831, 1,850; in 1841, 1,911; and in 1851, 1,627 souls. The manor of Hartley was held of the barony of Gaugy, by knight's service in the reign of King John, by Adam de Jesmont, and a mediety of it by Henry Delaval, in the reign of Richard II. The Delaval family afterwards acquired possession of the entire manor, and it is now the property of Lord Hastings. On Bate's Island, nearly opposite Hartley, there was formerly a chapel and hermitage dedicated to the Blessed Virgin. The village of Hartley is situated five miles and a half north of North Shields, and is principally inhabited by colliers, sailors, and fishermen. There is a Primitive Methodist Chapel here, and one belonging to the Wesleyans at Seaton Grove, a hamlet in this township, four and a half miles south of Blyth map

View Larger Map Hartley Burn Northumberland Water feature (river, lake, etc.) NY6559 54° 55.7' N 2° 32.3' W
... Hartleyburn parish lies in the very south-west corner of Northumberland, on the county boundary with Cumbria. Much of the parish is the high moorland of Hartleyburn Common with the valley of the Hartley Burn cutting through the centre and the hamlet of Halton-Lea-Gate at the foot of the fells. map 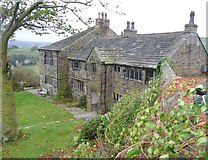